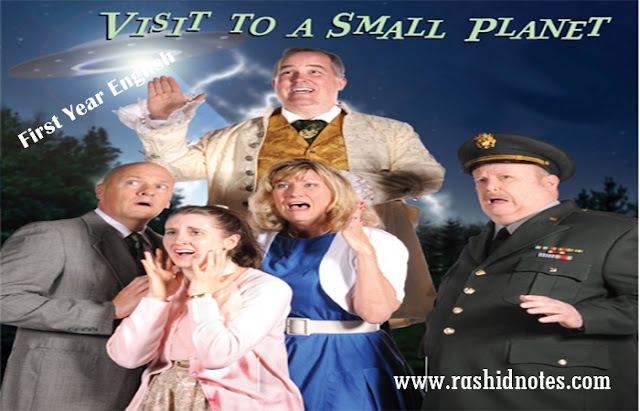 Q. How does Kreton prove his extraordinary powers?
Ans. Kreton proves his powers. Kreton has the power to ad people's minds. He raises an invisible wall around his spacecraft when the army men try to harm it.No one can touch him without permission. He and his people do not die.

Q. What is the purpose of the Kreton's visit?
Ans. Kreton has come to the earth to take the charge of the whole world. He also wants to observe and study the earth and development made by its inhabitants.

Q. How damaging is violence in life?
Ans. Violence is very dangerous both for individual and society. It disturbs peace and stirs chaos in the country. It debars the progress of the nation. When deserving people are neglected, they create violence and the country suffers at the end.

Q. What type of life do you foresee in year 5000?
Ans.We can foresee that in the year 5000, life will be more developed. Even a layman will be in  a position to visit other planets. Science and technology will be in more advanced form. The whole universe will be turned into a real global village.
Q. How much impressive were the morals of Kreton?
Ans. Kreton's morals are very impressive. He presents himself superior to General Power and other earthly people. He is very polite and humble from the very beginning of the play. He shows tolerance, patience and kindness towards others.

Q. What is the role of the General Powers in the play? "OR" Write a brief note on General Powers.
Ans. General Powers plays a very important role. His duty is to make sure the security of the country. After landing the spaceship he looks into the matter. He considers Kreton an enemy. He also represents the people of the earth.

Q. What did Mr. Spelding say about flying object in his TV broadcast?
Ans. Spelding concluded his TV bulletin by quoting General Powers that the flying object was nothing more than a meteor passing through the earth's orbit. All suppositions were baseless. He further quoted him that Americans would be the first to travel in the space.

Q. What was the impression of Kreton on seeing the inside of the house of Mrs. Spelding?
Ans. Kreton was delighted to see the inside of Spelding's house. He exclaimed that it was better than he had hopped.

Q. What restriction were imposed on Spelding's house?
Ans. After imposing Martial law at Spelding's house, General Powers restricted the use of phone and the movement of any body until the crises was over.